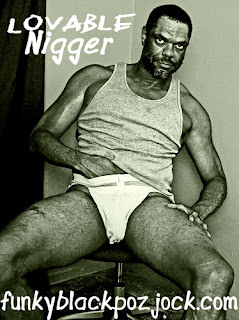 Many gay men are still in latent adolescence or living a life befitting of the Old South, where white men believed they were superior and blacks were not worthy of love, sex and equal rights. But scientists have recently confirmed that black people and white people (and indeed all peoples) are all monkeys, not just the Negroes some whites used to call monkey niggers.

That's right, humankind has reached a verdict: all men are descendants of the great apes; all men are created equally clueless, equally hairy, equally capable of seeing beauty and ugliness in all shades of human skin.

So that means your mind is capable of deciding that black is beautiful after all, that black men are not all undesirable, unlovable, ugly niggers undeserving of your love and affection. Yep, it's true: how you feel about all black men is all in your mind. Imagine that.