From Scared to Sexy 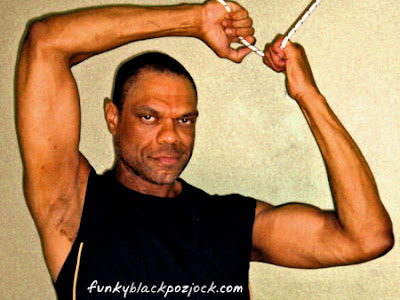 Once upon a time, I was afraid to have sex while being HIV-positive. Now, thankfully, I'm Still Sexual After All These Years.

Man of My Words 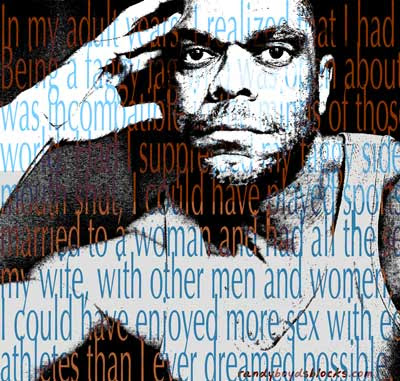 My first lesson on the power of words came one morning at the family breakfast table. My two older siblings used the wrong words when teasing our oldest brother, a brooding preteen. He retaliated the only way he knew and not with words.

My oldest brother threw a fork like a knife across the room, stabbing my other brother in the back. The doctors at the hospital said my injured brother was nearly paralyzed for life. I was instructed on how to lie to the adults who questioned me alone at the hospital. I told them it was all an accident. I assume my sister was given the same talking points. It was a sad and violent day in our family's young history, all because somebody used the wrong words.

Despite that bloody incident, my siblings and I continued to use words as weapons in our 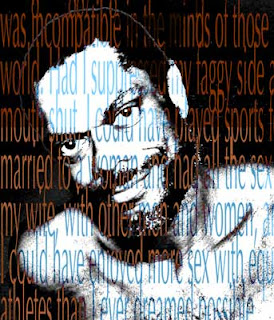 perpetual civil war. We each had an assigned nickname, given in mockery of some perceived defect or flaw. Anything to weaken your rivals. Even so, we lived under the constant threat of a war of words erupting into something worse (and not always just with us kids).

To escape the ball of confusion that was my early household, I told myself stories, sometimes on paper, sometimes in my imagination. Some of the stories centered around ragtag sports teams winning against all odds. The Losers finally getting theirs. Sometimes, a little black boy just like me was being rescued and loved by white race car drivers or athletes. Out of the fire of a hellish childhood, the storyteller was forged.

By junior high, I learned that words could serve as a passport to a better land, a place where teachers praised me for my writing assignments and my intelligence, which afforded me the privileges of a teacher's pet, all because of the way I used the words I was being taught.

Also in junior high, I learned that my words had special powers. For an English assignment, I 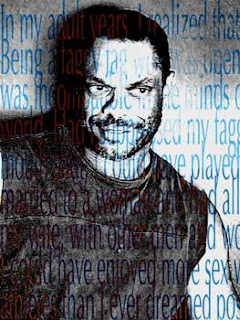 wrote a paper on Why the ABA and NBA Basketball Leagues Should Merge. I received an A. My mother, who was working her way through college at the time, “borrowed” my essay for an assignment. She received a B. Or was it a B-plus? I feigned indignation at her professor's lower mark, but in truth, the little boy inside was quite proud. After all, I had received a good mark for my eighth grade essay--in college!

By high school, I was ready to dive into journalism with great enthusiasm. I had a great teacher and mentor, Mr. Cord at North Central High School in Indianapolis, Indiana. Over the next three years, I went from a student in his class to a reporter for the school paper, the Northern Lights, to feature editor and finally, my senior year, editor-in-chief.

And while journalism will always be a part of me, being a journalist in the traditional sense was never part of my career

aspirations. For me, journalism, especially “old school journalism” is a great talent to possess, like an actor who can also sing and dance, or a musician who can play many instruments.

But I was never meant to spend my days telling other people's stories at the expense of telling my own. I've always had my own stories to tell, ever since I was a young boy who understood that words can take you places that are dark and scary, but words can also take you to the land of better dreams, even if only in your imagination.

interviews, you name it. There's a lot of shit out there that needs to be written. lol. Click here for my bio.

My four novels are like my kids. I'm proud of the way they turned out. Did I mention, they've been nominated for a total of five Lambda Literary Awards? Uprising is my angry, I'm-coming-out-with-a-gun suspense thriller. Bridge Across the Ocean is my ode to innocent boyhood adventures (from the point of view of a black gay man who recently tested HIV-positive).

The Devil Inside is my equivalent to Prince's Black Album. Or me getting in touch with my dark side, and asking: are we naturally fucked up as gay men?

Walt Loves the Bearcat is just the opposite: an optimistic, dreamy romance between a cheerleader and a quarterback, a tale of parallel worlds and long-term AIDS survival, and don't forget the flying football stadiums!

My next four books are like my grand-kids. The Bearcat Boyz is a four-book series about two boys in love in high school. Coming soon.

Then there's my author blog. Like a child who plays with blocks to make

words (to say something), I do the same at Randy Boyd's Blocks. And of course, there's this funky blog, featuring my sexy side and a Sex-in-the-City-esque take on my single life.

Words have been like food for my soul. That food has nourished me, kept me alive, helped me see my way through the world. I'll always be a man of words. And I'll always strive to be a man of my word. Words are very important. This I learned very early on. 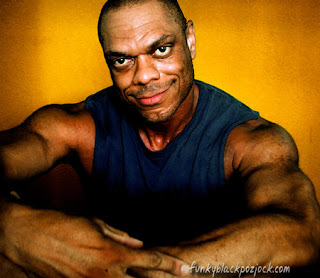 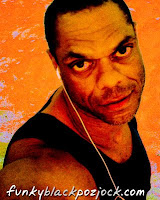 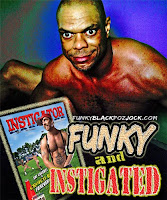 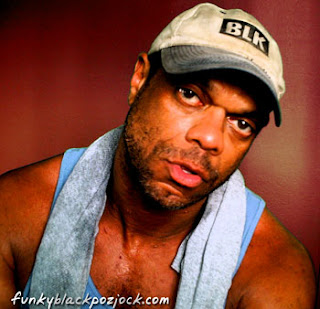 I had just sat down in front of the tube, plate of juicy burgers in one hand, remote in the other ... when there was a knock on the door.

The solicitor was too gorgeous to simply dismiss. He was a young white man in his early twenties with a body by sports. He lit up when he saw me. I lit up when I saw him light up at the sight of me.

Next thing I knew, the young man and I had agreed that he might as well come inside my house. It wasn't long before the Young Jock Offers Oral Sex for Magazine Subscription, now on my author blog at Randy Boyd's Blocks (.com). 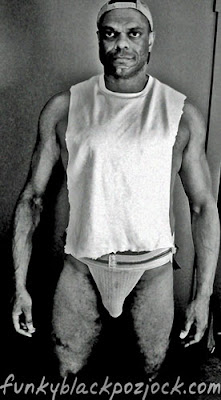 What kind of body do I dream of loving? Find out in Imperfect Bodies, Perfect Match

Must Test Positive for a Brain 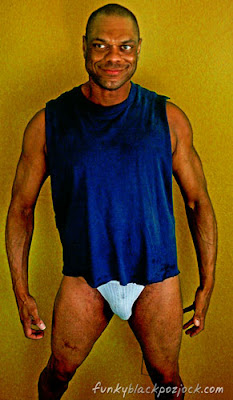 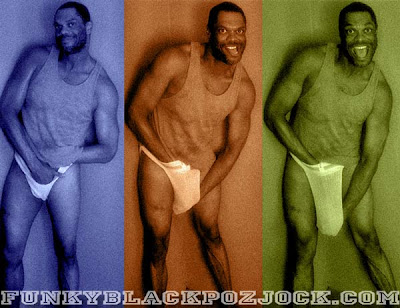 Should we fuck around with other people while in a relationship? Consider, if you will, these funky thoughts On Monogamy. 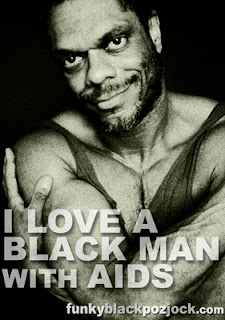 It could happen to you, too. Yes, that's right. You, too, can love a black man with AIDS. Regardless of your HIV status. In fact, you can love him and never, ever, ever, acquire a virus.

Did ya hear, world? People with AIDS can live long lives with lots of great sex! We can even have that great sex with you!

AIDS is preventable for HIV-negative people who have sex with HIV-positive people. It's called safe sex and it's an amazing tool. So Let's Fuck, I've Got AIDS! 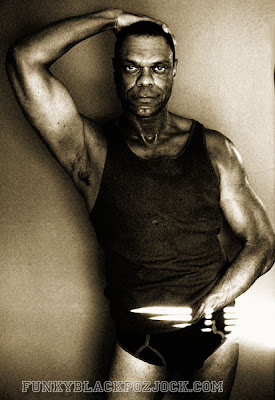 Why are so many people shocked when I tell them I'm single? Matter of fact, Why Am I Single? 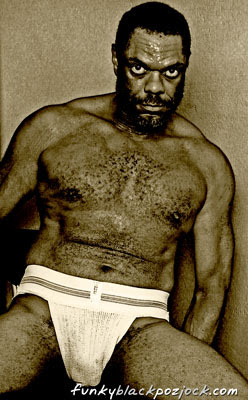 Is my dream man HIV-negative or HIV-positive? Find out in Charged Up: To Be or Not To Be HIV-Positive 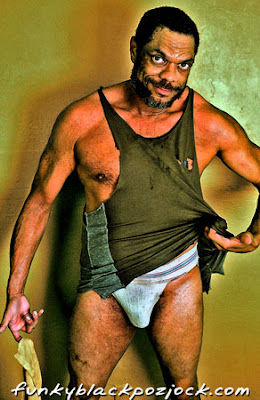 What else do I dream of my buddy and me doing besides smelling like men? Find out in My Buddy and Me: The Kind of Men We Are. 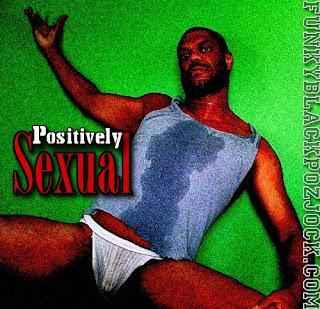 Not only have I been living with HIV/AIDS for over two decades, I'm Still Sexual After All These Years. Miracles happen!