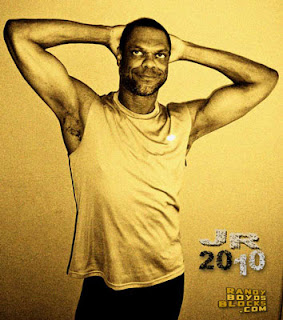 Growing up, my family called me Junior. I hated that name with a passion. It was often shouted with contempt, blame, distain. Junior is a bad name to have when someone is angry at you.

On top of that, I was a junior of a crazy-ass name, unheard of in any corner of the world. Impossible to Pronounce, Jr., that's who I was growing up. I associate Junior with an unhappy childhood.

They never called me Junior in school, just some random variation of Impossible to Pronounce. That is, until the Day I Died in 9th Grade Gym Class, fictionalized in my second novel, Bridge Across the Ocean, and re-fictionalized in my fourth novel, Walt Loves the Bearcat.

At age fifteen, I became Randy. Some family members have never gotten used to my new moniker, but I refuse to respond to Junior. In my early 40s, I gave those stubborn family members another choice: J. R., as in the initials, as in the Man.

Nowadays, I like marking my personal pictures with J.R., my way of owning who I am.