In Search of a Better Nut 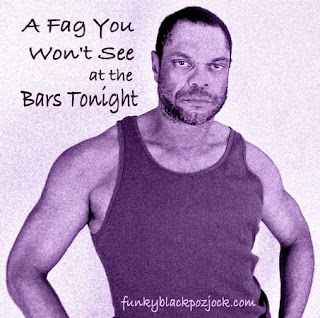 I thought about going to a bar tonight to look for my buddy. Or at least to get some ass since it's been awhile. I even got dressed, jeans and a collared shirt—a rarity for such a "casual" dresser like myself. Another rarity is me stepping foot inside a bar. But to coin a phrase from my novel, The Devil Inside, once in a while, “a man needs to shoot his wad on something besides his stomach or the good sheets.”

So tonight I psyched myself up enough to go out. Then ... ten minutes later ... my enthusiasm waned like a deflating balloon. Simply put, I didn't believe the psych. I got undressed, relieved I hadn't worked up the dog by telling him “be back.”

I didn't go out because I came to the realization: mingling in the neighborhood gay bar is mingling with the same men who ignore me on the Internet because—in their own words, not mine—I'm not what they prefer, which is men who are WHITES and LATINS ONLY and CLEAN and DISEASE FREE.

The jig is up. I don't need to stand in a bar to be rejected by the majority of gay men of America. They've already voted me off online.

So much for going to a gay bar tonight.

Instead, I decided to do something productive, like art therapy. That way, I'll have a better shot at working up a good nut before falling asleep to sweeter dreams.